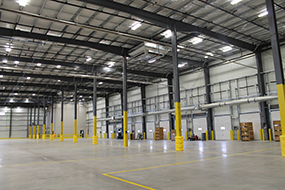 Rice Contracting Ltd. was founded in 1992 in Moncton by John Rice, and Gary Chapman.  In its humble beginnings the company had three employees and was located in a small office on Coverdale Road.

Today the office has expanded to 3800 sq ft and boasts a staff of 5 office personnel and 15 field personnel.  Rice's success has been attributed to our staff, many of whom have twenty-five years and more experience in the construction industry.

Rice has also developed a very impressive list of sub-contractors, who do quality work and are willing to give that extra effort to complete work on time and on budget. Each member of our construction team is dedicated to providing a safe jobsite and the best quality and performance for our customers.

For almost a quarter century, Rice has established itself as a premier developer  of major landmark buildings in the area. In Riverview, Rice built the Town Hall and Library, Chocolate River Station, Pinewood Road Fire Station, Dobson Arena, and numerous restaurants, churches and commercial developments. In Dieppe, Rice is responsible for the Tim Horton's - Shell service station on Dieppe Blvd, the Holiday Inn Express, and the new Dieppe firehall. In Moncton, Rice has built the Hildegard Fire Station, Botsford Street Fire Station, Trinity Auto Plaza, Motel 6, Taylor Auto Village, as well as many churches, restaurants, convenience  stores, banks, warehouses, trucking facilities, car dealerships and more. One of Rice’s most notable clients is the Tim Horton's organization. Rice has been involved in the renovation and competition of over 150 Tim Horton's locations across the province.

Rice is also involved with the community.  We provide a Construction Management Bursary in memory of Gary Chapman to the New Brunswick Community College every year. We are supporters of the Tim Horton's Children's Foundation, supporters of minor sports in the Moncton area and supporters to Friends of the Moncton Hospital.

We are the proud recipient of Butler’s High Performance Award. This award is given to Butler Builders that meet or exceed annual trade area goals as well as demonstrate superior marketing skills in the sale of Butler building and roof systems.

Through out this whole project you and your team were a delight to work with and the quality of construction and service you gave us was second to none.